nice reqs, thx for keeping cvgm running all this time

"Something else that I dabbled with in this track (and a few others in this project) was trying to not only synthesize basic drums like kick, snare and hi-hats but also 808-sounding percussion/toms. It sounds a bit too busy in this particular track but I think it reasonably effective. Actually something that's just struck me about all of the tracks in this project is that they could all do with being slowed down ever-so-slightly, they sound a bit rushed. Problem was, I never had any sort of tempo control when typing/editing the music sequences and so it would've been a tedious job to go through and slightly alter all the note durations!"

This song has been played 139 times. [See Request History]
It was added 11 years, 7 months ago.

Song Rating: 4.4 - Votes Placed: 8 View Voting History
A total of 5 users have this song on their favourites list. 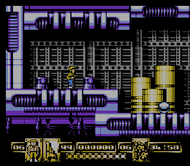