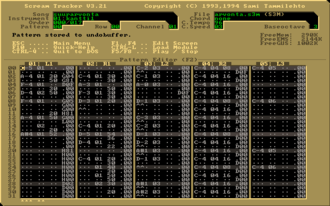 Following the footsteps of Amiga tracker music, some demoscene coders started to create PC tracker programs which could make music based on custom digital instrument samples.

Just few computer games on PC used tracker music but in PC demoscene tracker music became a standard. Sound card Gravis Ultrasound was popular in demoscene due to its extra memory reserved for instrument samples. But in most of cases people heard tracker music through their Sound Blasters.

-IT : Mod format used by Impulse Tracker which looks like Scream Tracker but has more features (including CD quality sound).