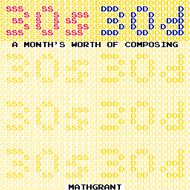 "Bazooka Sue was a point-and-click adventure, a Maniac Mansion-clone, developed and published by Starbyte 1997 for PC. It contains a lot of tunes composed by me that change due to different locations and game situations. I made the mods already around '93 - I don't know what took them so long until Starbyte released the game.
I never got any money for this either. Stupid world, it didn't really bother me back in those days.

As you can hear, I already worked a lot with selfmade guitar samples in this time.

Read the preview feature of the german game magazine "Powerplay" 8/93."

This song has been played 101 times. [See Request History]
It was added 12 years, 6 months ago.

Song Rating: 4 - Votes Placed: 6 View Voting History
A total of 0 users have this song on their favourites list.