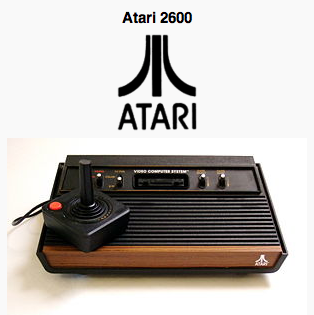 The Atari 2600 is a video game console released in October 1977. It is credited with popularizing the use of microprocessor-based hardware and cartridges containing game code, instead of having non-microprocessor dedicated hardware with all games built in. The first game console to use this format was the Fairchild Channel F; however, the Atari 2600 is credited with making the plug-in concept popular among the game-playing public.

The console was originally sold as the Atari VCS, for Video Computer System. Following the release of the Atari 5200, in 1982, the VCS was renamed "Atari 2600", after the unit's Atari part number, CX2600. The 2600 was typically bundled with two joystick controllers, a conjoined pair of paddle controllers, and a cartridge game—initially Combat and later Pac-Man.

The Atari 2600 was wildly successful. During the 1980s, "Atari" was a synonym for this model in mainstream media and, by extension, for video games in general, similar to "Nintendo" and "PlayStation" in the later 1980s and 1990s respectively.

The basic layout of the 2600 is fairly similar to most consoles and home computers of the era. The CPU was the MOS Technology 6507, a cut-down version of the 6502, running at 1.19 MHz in the 2600. The 6507 included fewer memory address pins —13 instead of 16 —and no external interrupts to fit into a smaller 28-pin package. Smaller packaging was, and still is, an important factor in overall system cost, and since memory was very expensive at the time, the 6507's small 8 kB of maximum external memory space wasn't going to be used up anyway. In fact, memory was so expensive they couldn't imagine using up even 4 kB, and when they got a deal on 24-pin connectors for the cartridge socket, they were only too happy to thereby limit the games to 4K. Later games got around this limitation with bank switching.

The console had only 128 bytes of RAM for runtime data that included the call stack and the state of the game world. There was no frame buffer, as the necessary RAM would have been too expensive. Instead the video device had two bitmapped sprites, two one-pixel "missile" sprites, a one-pixel "ball," and a 40-pixel "playfield" that was drawn by writing a bit pattern for each line into a register just before the television scanned that line. As each line was scanned, a game had to identify the non-sprite objects that overlapped the next line, assemble the appropriate bit patterns to draw for those objects, and write the pattern into the register. In a telling reveal of its Pong heritage, by default, the right side of the screen was a mirrored duplicate of the left; to control it separately, the software had to modify the patterns as the scan line was drawn. After the controller scanned the last active line, a more leisurely vertical blanking interval began, during which the game could process input and update the positions and states of objects in the world. Any mistake in timing produced visual artifacts, a problem programmers called racing the beam.

The video hardware gave the 2600 a reputation as one of the most complex machines in the world to program, but those programmers who understood it realized that such direct control over the video picture was also a source of flexibility. One advantage the 2600 had over more powerful competitors such as the ColecoVision was that the 2600 had no protection against altering settings in mid-line. For example, although each sprite nominally had only one color, it was possible to color the rows differently by changing the sprite's color as it was drawn. If the two hardware sprites were not enough for a game, a developer could share one sprite among several objects (as with the ghosts in Pac-Man) or draw software sprites, which was only a little more difficult than drawing a fixed playfield. Despite the hardware limitations, many Atari 2600 games have a lot of action on the screen, creating an engaging experience.

Additionally, the 2600 supported several types of input devices (joysticks, paddles, keyboards, etc.) and third-party peripherals, and many of these peripherals were interchangeable with the MSX and several other Japanese systems. In some cases, it is possible to use the Atari joysticks with the Sega Master System and Mega Drive/Genesis, though functionality may be limited. However Master System and Genesis controllers work quite well on the 2600.