"Strangely, and for reasons I can't actually fathom, the NSF that was kindly supplied to me by Bucky O' Hare over on The Shizz, has two versions of the same track, one slower and a slightly different pitch to the other one. Now the obvious reason would be that one version would be PAL and the other NTSC but I had a feature in the old audio engine to cope with PAL/NTSC differences without the need to have two different tracks. I'm only including them both here for completeness."

Song Rating: 4.4 - Votes Placed: 8 View Voting History
A total of 1 users have this song on their favourites list. 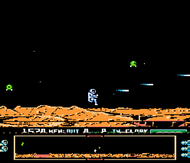