The Jungle Book - Track 8 by

The Jungle Book - Track 7 by

The Jungle Book - Track 6 by

The Jungle Book - The Bare Necessities

I put a huge amount of effort into the arpeggio chords for this song. I wanted to mimic strumming somehow so I could capture that ragtime banjo sound of the original track. If you think about how you strum chords, you've got upwards and downwards strumming and so I had the idea of not only working out the arpeggios to match the chords but to have upwards and downwards versions of them by reversing the order for the upstroke versions and also backing off the Attack amplitude. As you can imagine, putting together the subsequent sequence data was a nightmare! :)

I think it turned out really well and it's one of those things that you don't really notice until you hear the version with just straight arpeggios."

Song Rating: 4.4 - Votes Placed: 8 View Voting History
A total of 2 users have this song on their favourites list. 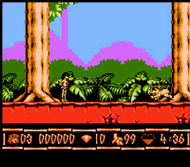