Trine - Throne of the Lost King by 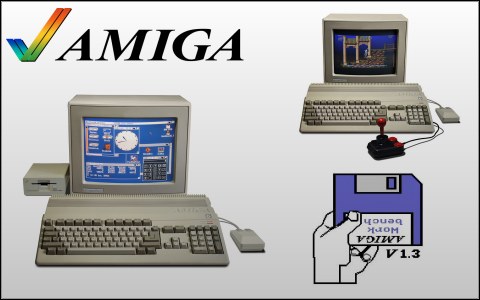 Things that should be added under this platform:
- songs ripped or recorded from Amiga games on actual system or emulator
- tracked songs in MOD format

Amiga was Commodore's home computer series. The first 16-bit Amiga was launched in July 1985. The most popular model Amiga 500 was released in 1987. Next generation "AGA"-models Amiga 1200 and Amiga 4000 appeared in 1992. All the Amigas contain Paula chip which plays 4-channel 8-bit PCM sound.

The development of Amiga had already begun in 1982 in Amiga Corporation which was later bought by Commodore. The first Amiga computer (later named Amiga 1000) was released in 1985 as expensive cutting edge product and Amiga 500 which was meant for average users came out in 1987. It became the most popular home computer model of its generation in Europe. In the USA Amiga's success was more modest. A2000 (1986) was developed for more professional use and had extra space for extension cards. A3000 (1990) was its successor and included also faster processor. A600 (1992) was yet simpler of its design than A500 and was meant to be cheaper but ended up being more expensive. OCS Amigas other than A500 and A600 have separate keyboards. Rare models A1500 and A2500 were odd variations of A2000.

Amiga was the machine most of active people used during the heyday of demoscene and warez groups in the late 1980s and the early 1990s. In addition to gaming and demos Amigas were used especially for graphics and video production by professional users.

German Karsten Obarski created the first tracker music program, Ultimate Sound Tracker, in 1987. That was the beginning of MOD/tracker music era. Now Amiga users (and later in the 1990s also PC users) could easily create music with better instrument sounds than before. This was made possible by Amiga's hardware support for PCM sound. MOD files use often samples recorded from "real life" as their instruments. Also some earlier computers could play recorded digital sound with the help of some programming tricks but due to the lack of hardware support their sound quality remained very low and often the use of samples consumed too much processor time to be used in games.

Since Amigas were not equipped with line-in ports, many users did not create their own instrument sounds initially and thus early MODs often re-use the same instrument sounds (many of which were distributed on a disk called "ST-01" after Sound Tracker). Many instruments used by Obarski himself can be also heard on songs by other composers. The first MOD song ever is music for the game "Amegas" by Obarski.

Despite of more advantaged sound chip, also Amiga music occasionally sounds "bleepy" in the manner of older computers. This is sometimes an intentional choice of composer but may also be due to the lack of disk space for instrument samples. Also during the early years many composers simply did not have software nor hardware to produce good instrument sounds. Though many early Amiga games are quickly made Atari ST ports, soon many designers started to make games utilizing Amiga's sound and graphic capabilities such as Shadow of the Beast (1989) which were technically the most impressive games of the late 1980s.

Next generation Amigas A1200 and A4000 (called AGA Amigas after their upgraded graphic capabilities) were released in 1992 but they could not stop the rising tide of IBM PC compatible computers. While the first Amiga models had been representatives of technological vanguard of home computers, this cannot be said of Amiga 1200. Even Amiga's sound capabilities were left intact while 8-bit 22 kHz sound and four channels were clearly an outdated concept in 1992 (SB16 and GUS cards for PC already featured 44 kHz sound with more than ten channels). In addition to these new AGA models, also Amiga based game console called CD32 had been released in 1993. It extended Amiga's life span for a moment. However, Commodore went into bankruptcy in 1994. German Escom company bought Amiga and continued selling A1200 for some time.

Technical info on Amiga's Paula sound chip:
-four sound channels, two for left and two for right stereo channel
-8-bit resolution and 6-bit volume control for each channel
-low-pass filter (the brightness of power LED indicating whether it is on or off)
-direct access to computer's RAM (DMA) to play sound without CPU intervention

Four sound channels can be divided to play sound with smaller frequency but more channels. For example Turrican games use Jochen Hippel's 7-sound system and Teijo Kinnunen's OctaMED tracker allows the use of eight channels simultaneously.

When uploading CD32 songs choose "source" as "Game (CD Audio)" if the music is stored as that.