Metal Gear Solid 4: Guns of the Patriots - Laughing Octopus by 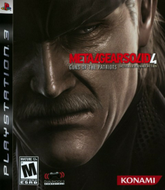 From STIL: Although the game clearly states that the music is by John York, it was really done by Rob Hubbard. Due to the 'tacky' nature of the game, Rob preferred not to have his name associated with it. According to Hubbard, it's his worst tune, anyway.

Rob Hubbard said: "Sam Fox Strip Poker was such a cheesy title and they wanted that cheesy lame music along with it - I didn't want to admit that I did it just for the money !! John York was the first name that I thought of and used as an alias...."

This song has been played 129 times. [See Request History]
It was added 12 years, 3 months ago.

Song Rating: 4.2 - Votes Placed: 10 View Voting History
A total of 4 users have this song on their favourites list.