The Music of Command & Conquer - Depth Charge by

The Music of Command & Conquer - We Will Stop Them

including all Expansions are now
LEGALLY FREE DOWNLOADABLE GAMES:
http://www.cncworld.org/?page=features/tutorials/rafree

you can even play C&C in high res now with the lates patches.

This song has been played 60 times. [See Request History]
It was added 11 years, 2 months ago.

Song Rating: 3.3 - Votes Placed: 3 View Voting History
A total of 0 users have this song on their favourites list. 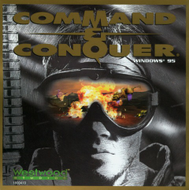