4-mat playing live at Blip Festival 2011 at the Eyebeam center in New York (5-21-2011). Set performed after a bad crash of his netbook earlier in the day. It was still an awesome set, and one that I will never forget! Just awesomeness!

FishGuy876 said: "Yes, the guy yelling AMIGAAAAHHHHH! in the beginning, and a couple of other times is me :) I talked to Matt beforehand and he said it would be cool if people did it :)"
---

Footage recorded by CVGM (thanks to

This song has been played 76 times. [See Request History]
It was added 11 years, 4 months ago.

Song Rating: 4.5 - Votes Placed: 26 View Voting History
A total of 11 users have this song on their favourites list. 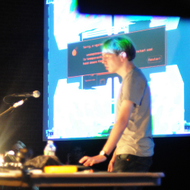